Learning Together – The ACP-TradeComII Experience

If there’s one thing the African Caribbean and Pacific (ACP)-TradeComII Programme initiative, implemented by CROSQ and funded through the European Union, has taught us, it is that we can learn so much from each other – if we are willing to share and listen.

The project, which came about as a result of a proposal by CROSQ to the ACP-TradeComII Programme, had two different components. The first was to create Regional Good Regulatory Practice Guides, with a Regulatory Impact Assessment template for the CARICOM region, based on Economic Partnership Agreement and World Trade Organisation Technical Barriers to Trade principles, guidelines and recommendations.

Directors and participants from CROSQ at a training workshop in Barbados.

These guides, targeting our regional regulators, were aimed at making the EPA-related regulatory practices more easily understood by identifying cases, common positions and implementation issues that could be tackled using a common approach. It also tried to build capacity in the region, by training national standards bureaux and national regulators in these Guides. Coming out of this a national code of practice would also be developed to help strengthen the practices.

The second aspect of the project focussed on technical assistance to strengthen trade-related quality infrastructure in the region. This meant closer partnerships between Africa, CARICOM, and the Pacific Islands, but also utilising some of the best practices observed from the European Union which could help these three regions gain greater access to European markets.

There were missions to both Fiji and Kenya, where the Pacific Islands came together to learn from CARICOM and how it has developed its quality infrastructure. Workshops with stakeholders there saw the formation of an action plan to help the countries develop their infrastructure collectively, patterned off the CROSQ network’s and the African Organisation for Standardization’s experiences.

Participants at the knowledge sharing workshop in Fiji.

Ms. Mere Falemaka, Ambassador and Permanent Representative of Pacific Islands Forum States (PIFS) to WTO, noted that for the Pacific the development of QI was “very complex”. She said they had been trying to address some of the issues as far back as 2005, and the joint efforts of CROSQ and ARSO in showing how these two regions have been able to do it collectively gave them hope.

“The value-added this time is the presence of our south-south partners, to learn from what they have done, from the success of CARICOM through the work of CROSQ, and also the work that has been done to support regional integration in Africa through quality infrastructure led by ARSO,” she said.

The visit involved discussions with the General Secretary of ARSO, Dr. Hermogene Nsengimana, and his technical team, which took the CROSQ team on tours of coffee and aquaculture production businesses which are implementing regional sustainability standards. 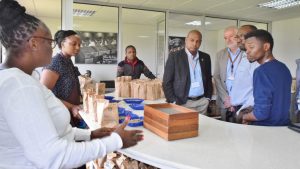 Mr. Reuben Onyangore, Technical Director, ARSO said the sharing experience both with CROSQ and the Pacific, had been useful in exchanging idea towards addressing common challenges using a regional approach.

“We have attempted that in Africa where we thought we were strong, because our countries sometimes are big, our economies are slightly bigger, and we’ve failed; and we really look at encouraging the Pacific region countries to ensure that they can start by having a regional approach so that their challenges become manageable and easily surmountable.”

This project is about to come to a close and all entities have recognised the value of what the ACP and the TradeComII Programme have supported to happen amongst these regions.

Mr. Deryck Omar, CROSQ’s CEO summed it up as thus:

“We all have the same issues, we have the same agendas and we all want to make the same contributions at the end of the day. So in different areas the Caribbean is stronger than the Pacific and Africa, but in other areas they have unique strengths that we can draw on. So it is a very nice giving and taking relationship development in quality infrastructure.”

The project was implemented by CROSQ but managed by the Quality Institute of Spain.