How the Caribbean Fits Into the International Metrology System

by Anselm Gittens and David Tomlinson

Long before most of the islands of the Caribbean gained independence from their metropoles, 17 countries signed, in 1875, a treaty that would form the basis for the coordination and development of accurate and harmonized global measurements. The Metre Convention, signed on May 20, 1875, created the International Bureau of Weights and Measures (BIPM) located in Sevres, Frances and established the structure whereby member governments would harmonise all matters related to the use of the International System of Units (SI) as the basis for international measurements. This number eventually grew and as of January 13, 2020 there were 62 Member States and 40 Associate States and Economies.

In the Caribbean, Cuba was the first to take a decisive step towards harmonizing its measurements with the international system and joined the BIPM as an Associate State in 2000. Jamaica also joined as an Associate State in 2003 having benefitted from years of technical cooperation with Germany and therefore having the most developed capability in the English-speaking Caribbean.  Not to be outdone, 11 English-speaking Caribbean States[1] who are also members of the Caribbean Community (CARICOM) banded together to join the BIPM in 2005 as an Associate Economy. CARICOM is currently, the only group of nations that have been permitted to join as an Associate Economy and from all indications it will be the last. Coordination of the CARICOM Associate Economy has been delegated by the CARICOM Secretariat to the CARICOM Regional Organisation for Standards and Quality (CROSQ). Each country is represented by the National Metrology Institute (NMI) which in most cases in the Caribbean also happens to be the National Standards Body. In the case of Jamaica, for example, it is represented by the Bureau of Standards Jamaica (BSJ) and similarly for the countries of the CARICOM Associate Economy, their respective Bureaux of Standards (ABBS, BNSI, BBS, DBOS, GDBS, GNBS, SKNBS, SLBS, SVGBS, SSB and TTBS) participate on behalf of the country.

The BIPM has organised the participation of NMIs through six regional associations of NMIs called Regional Metrology Organisations (RMOs). The NMIs of the Caribbean fall under the Inter-American Metrology System (SIM). The Caribbean sub-region of SIM is called CARIMET and benefits from excellent support from the SIM Secretariat and technical cooperation with the NMIs of SIM to develop the capabilities of Caribbean NMIs. 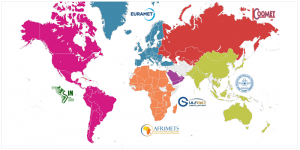 In joining the BIPM, these Caribbean NMIs not only get to contribute to the development of the international measurement science (metrology) and measurement standards but also have the opportunity to gain international recognition by demonstrating the comparability of their measurement capability. This comparability is critical as it forms the basis for international trade, academic research, innovation, commerce and regulatory enforcement. To support this system of demonstrated competence the BIPM developed a mutual recognition agreement (MRA) called the CIPM-MRA[2]. Through this CIPM-MRA, NMIs can demonstrate the equivalence of their measurement standards and the calibration certificates they issue by displaying their peer-reviewed and approved Calibration and Measurement Capabilities (CMCs) on the CIPM-MRA database also known as the Key Comparison Database (KCDB). In addition to allowing each NMI to publish their own CMCs, the BIPM has given each country the right to designate other institutions, who have capability and responsibility for some part of the national metrology infrastructure, to also publish CMCs on the KCDB. This therefore opens up the possibility for other key national laboratories to gain international recognition to support areas such as pesticide residue testing, food and chemical analysis.

In addition to storing information on the approved CMCs, the KCDB also stores information on the critical comparisons that are routinely conducted to demonstrate the equivalence of measurements between countries. These exercises are called inter-laboratory comparisons (ILCs) or simply intercomparisons, and in these comparisons one or a set of measuring instruments, standards or samples are sent to the participating NMIs and the measurement results obtained by each are compared to some reference. The results of these comparisons are also published in formal reports on the KCDB and are available for the public to access at any time. The results of each ILC serve as a record of the participating NMIs’ technical competence.

While Jamaica and a number of countries forming the CARICOM Associate Economy have participated in intercomparisons, only Jamaica has developed to the point of publishing CMCs on the KCDB. Currently, the BSJ has 22 CMCs in mass with plans to publish more in the quantities of temperature, volume and dimensions. The NMIs of the CARICOM Associate Economy are either now poised or are positioning themselves to publish their first set of CMCs. Trinidad & Tobago through the Trinidad & Tobago Bureau of Standards (TTBS) is expected to be the first country from the CARICOM Associate Economy to publish CMCs in mass which will eventually be followed by dimensions, temperature and volume. Over the next five years Belize (BBS), Grenada (GDBS) and Saint Lucia (SLBS) are expected to do likewise in the quantities of mass and volume.